Morris James attorneys and staff continued the firm’s longstanding support for the Delaware High School Mock Trial Competition with twelve attorneys serving as judges or coaches at the annual competition held at the New Castle County Courthouse on February 26-27, 2016.  Jason C. Jowers, a partner in the firm’s Corporate and Commercial Litigation Group, completed his seventh year as Chair of the competition and received the Pete Jones Award, named after Morris James partner Pete Jones, given to an individual who has demonstrated sustained commitment to the goals and values of the mock trial program. Eric Hacker, an associate in the firm’s Georgetown office, coached Sussex Central, the first team from Sussex County to advance to the finals of the competition. In addition to Jowers and Hacker, the Morris James attorneys who participated as coaches or judges included partners Kevin Healy, Pete Jones,  Lewis Lazarus, Dennis Schrader, Joe Slights, and David Soldo, and associates Megan Adams, Kyle Evans Gay, Nick Kravitz,  Beth Powers,  and Laura Readinger. Also, Morris James administrative assistant Margie Touchton served as the Judge Volunteer Coordinator.

Delaware Supreme Court Justice Collins J. Seitz, Jr.,  the presiding judge of the championship round, commented that the future of the practice of law in Delaware is bright based on the skill demonstrated by the finalists.  David Williams, the firm’s managing partner, expressed his gratitude to the attorneys and staff who gave so generously of their time to aid the next generation of Delaware lawyers, noting that “this type of dedication exemplifies the type of community service for which the firm is proud.” 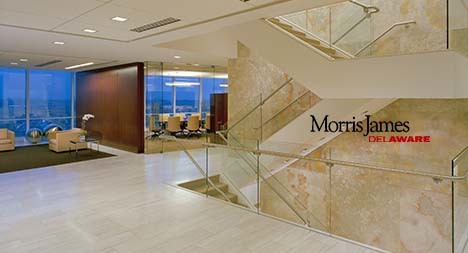 COVID-19: A Message from our Managing Partner