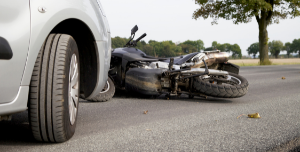 The most common cause of a crash between a car and a motorcycle is driver negligence. Vehicle drivers often fail to exercise appropriate care on the roads and pay attention to motorcyclists who are less visible and more vulnerable on the roads. Find out what steps you should take if you have been involved in an accident.

What should I do if I've been in a motorcycle accident?

If you have been in a motorcycle accident, you should call 911 to call the police and ambulance, if necessary. You should get medical attention as soon as possible for your injuries. Even injuries that seem minor can develop into chronic problems, and some injuries may not even appear immediately. Keep copies of the police report, your medical reports, and medical expenses for any future claim.

Get contact details for any witnesses and people involved in the accident. The police should also gather witness details but it is advisable to gather your own details to ensure that everyone is included. Get a name, address, and telephone number or email address, if possible.

Take photos/videos of the scene of the accident. Evidence of things such as the location of the accident, road and weather conditions, skid marks, property damage, and injuries, may be crucial in determining liability for the accident and the amount of any compensation awarded.

Finally, get the advice of an experienced motorcycle accident attorney. You may be entitled to significant compensation for your injuries and financial losses (such as lost wages) as a result of the accident. A good attorney can deal with the insurance companies and other drivers, and help you to get the compensation that you need.

Should I get a lawyer if I've been in a motorcycle accident?

Victims of motorcycle accidents tend to get significantly higher compensation if they have legal representation. If you have been in a motorcycle accident, a lawyer can explain your legal rights and your chances of success, and help you get the compensation you deserve. A lawyer can also handle the burdensome phone calls and paperwork after an accident that are necessary to deal with the other parties and insurance companies involved.

Most motorcycle accident lawyers will talk to you about your accident with no charge for an initial consultation. Many will also take your case on a contingency fee basis, which means that any legal fees are only paid out of the settlement or compensation that you receive.

What's the most common cause of a crash between a car and a motorcycle?

The most common cause of a crash between a car and a motorcycle is driver negligence. Vehicle drivers often fail to exercise appropriate care on the roads and pay attention to motorcyclists who are less visible and more vulnerable on the roads. Intersections are a particularly dangerous place for motorcyclists with 42% of all fatal accidents involving a car and a motorcycle caused by left-turning vehicles. In these situations, the car driver turns left at an intersection into the path of a motorcyclist who is traveling straight ahead, passing or overtaking another vehicle.

What is a typical settlement range for motorcycle accidents?

A negotiated settlement amount or a compensation award in a motorcycle accident can vary greatly and will depend on a number of factors, including the circumstances of the accident and the severity of the victim's injuries. The victim should be compensated for their injuries, their physical and emotional suffering, and any financial losses, which could include medical expenses, travel to medical appointments, lost wages, childcare costs, and any other monetary loss. It is not possible to estimate the amount of a compensation award or settlement without detailed information about the individual accident and the victim, and no compensation or settlement amount is guaranteed.

Can I be compensated for pain and suffering following a motorcycle accident?

How can I settle a motorcycle accident claim?

The more complex and costly your case is, the more likely the insurance company will push back against your claim. When a settlement is finally agreed, you will sign a settlement agreement and release in which you will agree that you will not sue the at-fault party, and are not entitled to any further compensation from the accident. There is a limited time to settle before a lawsuit must be filed.

What's the maximum you can get in a motorcycle accident settlement?

Who is at fault in most motorcycle accidents?

Most motorcycle accidents are caused by the driver of another vehicle. Every accident is different, and if a claim arises, the actions of all drivers will be considered but in the majority of claims, the driver of the other vehicle is held responsible.

What are the most common injuries from a motorcycle accident?

Motorcyclists are very vulnerable to severe injuries in an accident. Common injuries in a motorcycle accident include:

Can I sue for negligence if I was hit by someone who was texting while operating a motorcycle or bicycle?

If you are injured by someone who was texting while operating a motorcycle, ebike, or bicycle, you may be able to sue for compensation for your injuries in negligence. All riders have an obligation to exercise reasonable care and texting while riding may be considered a failure of this duty. In order to succeed in a negligence claim, you will have to show that the rider owed you a duty of care, that they breached their duty, and their breach caused you harm.

Some states have laws against texting while driving or riding, and you should also check the laws in your state. Local authorities, including some Delaware towns and cities, also have prohibitions on texting while driving or riding. This can result in a fine for the rider and may be relevant to a claim in negligence. An accident lawyer can advise you on your legal position in your specific accident and locality.

What is an ebike?

An ebike (also known as an e-bike or electric bicycle) is a bicycle with an integrated electric motor that boosts the pedal power of a standard bicycle. Ebikes come in a wide range of styles from commuter to cargo bikes. The ebike's battery-powered assist helps the rider to pedal uphill and longer distances. Some ebikes also have a throttle that propels the ebike without pedaling. In Delaware, an ebike is defined as a 2- or 3-wheeled vehicle with fully operable pedals and an electric motor of less than 750 watts (1 horsepower), whose maximum speed on a paved level surface, when powered solely by such motor while ridden by an operator who weighs 170 pounds, is less than 20 miles per hour.

In most states, including Delaware, ebikes are not considered motorized vehicles like mopeds or motorcycles. You should check the laws in the state in which you are riding. Until February 2021, ebikes were treated as motorized vehicles on federal public lands but the US Department of the Interior issued new regulations which defined ebikes as non-motorized vehicles, allowing them to be used on the non-motorized trails like a standard bicycle.

Ebikes are not inherently more dangerous than standard bicycles or motorcycles, though they do have some different safety considerations. The most important factor is the skill and safety of the rider rather than the ebike itself. For example, an ebike often travels at a faster speed than a standard bike but slower than a motorcycle. When riding on the roads, an ebike is therefore likely to be passed more often than a motorcycle but not more than a regular bicycle. The ebike is not more dangerous but the rider should be comfortable riding on roads and being passed in traffic just as on a regular bicycle.

Most accidents involving ebikes are caused by rider error, failure to follow the rules of the road, or take safety precautions. Ebike riders must take care to be safe on the road just like other road users. This includes following applicable rules and wearing appropriate safety gear.

What should I do if I am involved in an ebike crash?

If you are involved in an ebike crash, you should call 911 to notify the police and summon an ambulance, if necessary. Your wellbeing is the primary concern and you should get medical attention for your injuries. Even injuries that seem minor can become more severe, and should not be ignored. See your healthcare provider as soon as possible after the crash. Keep a copy of the police report, medical reports, and medical bills as these will be important in any claim arising from the accident.

Take photos and/or videos at the crash site. These may be important evidence of how the accident happened, and the extent of injuries and property damage.

Get contact details for any witnesses of the crash and anyone involved in the crash. The police should also do this but, to ensure that no one is missed, it is advisable to get the name, address, and phone number or email address of any witnesses for your own records.

Contact an experienced accident lawyer to find out about your rights and obligations as a result of the crash. It is helpful to speak to a lawyer at an early stage to ensure that you do not do anything that might affect your claim or liability as a result of the accident.

Are ebikes street legal in Delaware?

Yes. Ebikes may be ridden on roads and bike paths in Delaware like standard bicycles. However, you should check the rules of any local authorities regarding the use of bicycles or ebikes in specific areas.