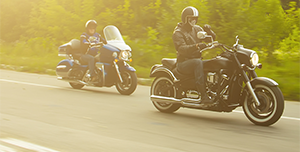 Three people tragically died, and another was seriously injured in a motorcycle crash on Monday night near New Castle, Delaware. This is the latest preventable tragedy in a series of motorcycle accidents in Delaware.

In what has been described by local reporting as a high-speed motorcycle accident, a 2020 Kawasaki Zx6 motorcycle driving at a high rate of speed crashed into the side of a Minivan operated by a 47-year-old woman from New Castle, Delaware. The minivan driver was seriously injured, and both the front seat passenger (a 69-year-old woman from Sun City, Florida) and rear-seat passenger (a 16-year-old girl) were pronounced dead at Christiana Hospital. The driver of the motorcycle also died as a result of the accident that occurred near the intersection of Prangs Lane and Route 273.

Morris James has earned national prominence for handling complex motorcycle accident cases. Our attorneys are ready to assist victims of these awful and unnecessary accidents. Contact us today for a free consultation.