This is an important decision that reverses a prior opinion in the same case. The Court did so because after it issued its prior opinion, the Delaware Supreme Court issued its Corwin decision holding that when a merger is approved by a disinterested Board and a majority of the fully informed stockholders, the business judgment standard of review applies. This Court concluded that under that standard, the Board’s actions were not grossly negligent.

By Edward M. McNally on October 30, 2015
Posted In Discovery

This recently released transcript has a good explanation of how to apply the Garner/Wal-Mart principles governing when stockholders may get discovery of documents otherwise subject to the attorney-client privilege. The multiple facts involved, particularly in a Section 220 case, tend to permit such discovery when the issue is whether demand is excused to file a derivative suit. More › Morris James LLP was presented the Leadership Award at the Delaware State Bar Association’s Christopher W. White 2015 Distinguished Access to Justice Awards Breakfast on October 29th, 2015. The Leadership Award is given to the firm who has demonstrated outstanding leadership in the field of pro bono service to the impoverished in Delaware, and who fosters a culture which recognizes the value of Access to Justice service.  More ›

By Edward M. McNally on October 29, 2015
Posted In Appraisal

This decision illustrates the dangers of appraisal arbitration. More ›

Court of Chancery Again Explains Claim Against An Investment Banker

In this unusual factual circumstance, the Court denied a motion to dismiss a claim against an investment banker for aiding and abetting a board’s alleged breach of its duty to act with care.  Note that the board itself was dismissed because, even if it violated its duty of care, the exculpation clause in the corporate charter immunized it from liability. More ›

Court Of Chancery Holds Section 205 Is Limited To Validating Action

By Edward M. McNally on October 29, 2015
Posted In Securities

In a case of first impression, the Court holds that Section 205 of the DGCL can only be used to validate defective corporate actions, not to declare an action invalid. While a similar claim might be made in a Section 225 case, there are limits to who may bring such a claim, so this decision does make a real difference.

Court Of Chancery Explains When Director May Bring An Advancement Case

By Edward M. McNally on October 29, 2015
Posted In Attorneys' Fees/Costs/Interest

This is another example of when a director may seek advancement when he is acting affirmatively and not merely as a defendant.

By Edward M. McNally on October 29, 2015
Posted In Directors

In this unusual case, the Court of Chancery has reinstated a director who was tricked into resigning. The opinion has a good discussion of how directors may resign and when their resignation is not effective.

Morris James LLP is pleased to congratulate the lawyers listed below, who were most recommended by their professional peers in a survey of Delaware attorneys conducted by Delaware Today magazine. Sixteen Morris James attorneys were distinguished in their respective practice areas, with seven named as “top vote-getters,” listed below in bold. More ›

By Edward M. McNally on October 23, 2015
Posted In Jurisdiction

It is often assumed that merely by registering an entity in Delaware as part of a business transaction that you have become subject to the jurisdiction of the Delaware courts. But as this decision points out, that is not as simple as you might think. More ›

The Increasing Role of Equity in Delaware LLC Litigation

In the October 2015 issue of Business Law Today, an article authored by Jason C. Jowers and Meghan A. Adams examines the increasing role of equity in LLC litigation.  Both the case law and an amendment to the Delaware LLC Act in recent years demonstrate Delaware's rejection of a solely contractarian view of LLCs. The recent Delaware Court of Chancery decision of In re Carlisle Etcetera LLC provides new lessons on the subject of equity's reach. Although the length of equity's powerful arm into the area of LLC litigation may surprise some practitioners, there is a consistent theme in the case law that may provide comfort: the Court of Chancery normally will only exercise its equitable powers when the parties have left gaps in their operating agreement. 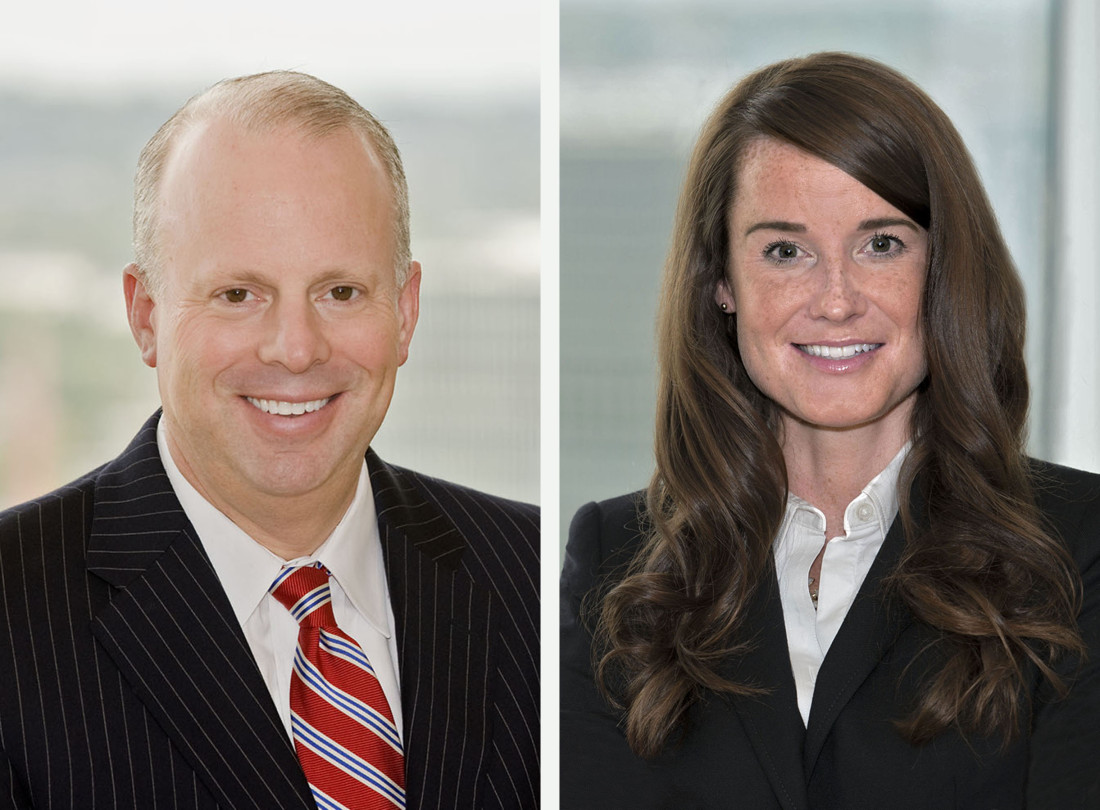 Joseph R. Slights, III and Elizabeth A. Powers wrote an article published in the Volume 70, Number 4, Fall 2015 edition of the ABA Business Law Section's The Business Lawyer. Their article was titled "Delaware Courts Continue to Excel in Business Litigation with the Success of the Complex Commercial Litigation Division of the Superior Court." This article discusses the relatively new Delaware Superior Court's Complex Commercial Litigation Division ("CCLD") and its reputation as a premier business court in keeping with the Delaware judiciary’s tradition of excellence in the resolution of corporate and business controversies. The article further analyzes the benefits and advantages of the CCLD, as it offers litigants an alternative venue for complex commercial litigation where equitable jurisdiction is lacking. The authors conclude that thus far business litigants have embraced the CCLD due to its flexibility and responsiveness to the needs of the particular case.

The Delaware Supreme Court in Corwin v. KKR Financial Holdings LLC, No. 629, 2014 (Del., October 2, 2015), issued an important opinion authored by Chief Justice Leo E. Strine Jr. resolving uncertainty about the effect fully informed, disinterested shareholder approval has on the judicial review of a transaction. Specifically, the court ruled that in a merger transaction with a party other than a controlling shareholder, the voluntary, informed judgment of the disinterested shareholders to approve the transaction will invoke the business judgment rule standard of review. Thus, even if the board of directors is not independent and disinterested, and in the absence of a valid disclosure or waste claim, the approving shareholder vote will permit pleading-stage dismissal of the claims against the directors. More ›

Judicial Dissolution: Are the Court of the State that Brought You In the Only Courts that Can Take You Out?

Peter B. Ladig co-authored an article published in the Volume 70, Number 4, Fall 2015 edition of the ABA Business Law Section's The Business Lawyer. Their article was titled "Judicial Dissolution: Are the Courts of the State that Brought You In the Only Courts that Can Take You Out?"  This article discusses whether a state court can judicially dissolve an entity formed under the laws of another state. The recent dissolution of Interstate General Media, LLC, the limited liability company that owned The Philadelphia Inquirer, the Philadelphia Daily News, and the website philly.com, brought to light the issue of which court should hear the request for dissolution after two simultaneous actions were filed in the Commerce Court of the Philadelphia Court of Common Pleas and the Court of Chancery of the State of Delaware. They also analyze the historical attitude toward dissolution of domestic entities and why dissolution is different from other types of claims. 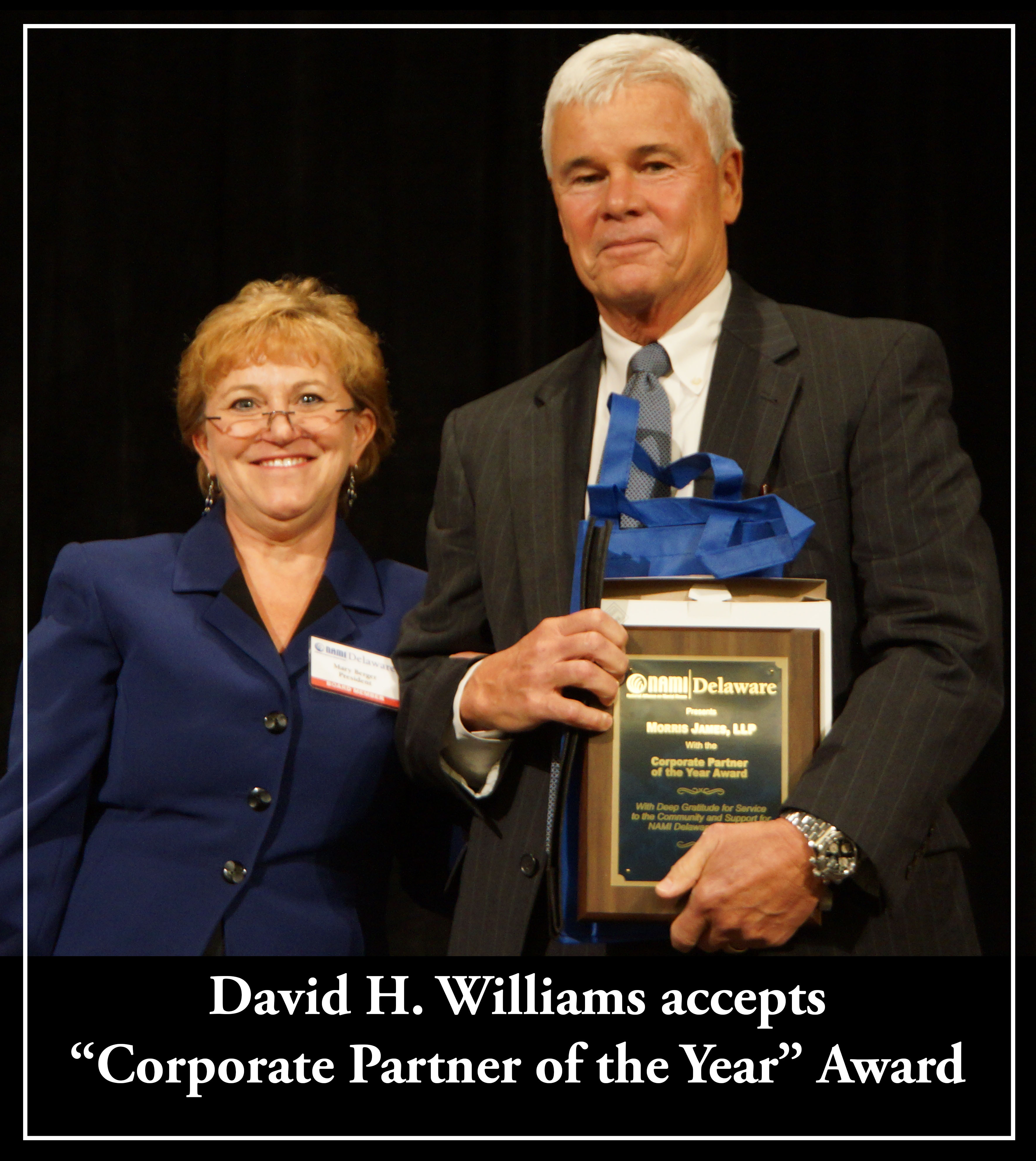 The National Alliance on Mental Illness (NAMI) of Delaware has recognized Morris James as its “Corporate Partner of the Year.”  Managing partner, David H. Williams, accepted this award given in recognition for the firm’s service to the community and support for NAMI Delaware’s mission. National Alliance on Mental Illness (NAMI) is a nonprofit group that raises money and awareness for the treatment of people with mental illness.  Over the past 13 years, a dedicated team of Morris James employees has raised money each year in the NAMI Delaware Walk. Margie Touchton, a long-term employee, has led Morris James’ effort which contributes money to fund people in group homes around the state.  More ›

Court Of Chancery Explains How To Interpret A Contract

By Edward M. McNally on October 5, 2015
Posted In Breach of Contract

This is a great case for an explanation of how a court should go about interpreting an ambiguous contract. It explains how extrinsic evidence is used and the role of the good faith negotiator principle.

There has been some debate about the effect of an approval by a majority of a company’s stockholders of a transaction with an unrelated third party - does that invoke the Business Judgment Rule? The question arose over different interpretations of two Supreme Court decisions in the Gantler and other KKR cases. This decision settles the debate by firmly holding that majority stockholder approval does invoke the BJR standard of review at least when the stockholders are fully informed.

Delaware Supreme Court Explains How To Do The Director Interest Test

By Edward M. McNally on October 2, 2015
Posted In Derivative Claims

Deciding if a director is sufficiently tied to a controller so as to be disqualified from passing on a transaction independently is an important decision because it may determine if a derivative suit meets the demand excuse test. More ›

This interesting decision both explains the conspiracy theory of jurisdiction and upholds an equitable contribution claim by the company required to advance fees to a director to have the director’s companies contribute toward those fees.  This occurs when the second company has benefited by the conduct of the director acting for it.